Sci-MX GRS 9 Is very similar to a USN protein called USN IGF1 it is a time release protein with a blend of different proteins, almost identical in make up. I would say that Sci-MX GRS 9 may have inspired or was inspired by USN GF1.

There is a reason such a blend of protein in the Sci-Mx GRS 9-hour protein and the reason is in the name. Milk protein has in it both whey protein as well as casein protein which allows for both a fast and a slow digesting proteins. This slows the overall protein digestion down, the gut digests the whey protein fast whereas the casein protein in GRS 9-Hour Protein allows for a slow drip feed of amino acids into the muscle.

This kind of protein is very good post workout in the evening, if you workout until say 8pm and take the Sci-Mx GRS 9-hour protein shake you will still be getting amino acids delivered into the muscles until 5am the following morning. This means your muscles can easily recover over night and grow, making your muscles longer and stronger than ever before.

We had the pleasure a while back to do a review of Sci-MX GRS 9 Hour Protein powder. When it comes to time release proteins we have no shortage of people who want to do the review. We had the tub from Amazon, we went for the Strawberry flavour as its one of the best ways to check for the flavour as its a widely used flavour. We found that the powder smelt really good and had a creamy look to it. We tried our first shake for the review and it mixed well with both water and milk. There was no clumps in the shake and similar to other time release protein powders there was a thickness to the protein shake. The thickness is a true sign there is casein protein present which is vital for the time release protein type.

The flavour is great, tasty and very creamy. We found after a few weeks of taking the Sci-MX GRS 9-hour protein for the review we are all recovering well, there was good muscle gain amongst the team and this is a firm favourite time release protein.

We have continued to review the chocolate flavour Sci-MX GRS 9-Hour and again its lovely, thick and very chocolatey protein shake that is time released and delicious.  Sci-Mx seems to have changed hands and we are watching closely as the availability of different proteins such as the time release proteins. We watch this space to see what the new owners will do with Sci-Mx Time Release proteins. 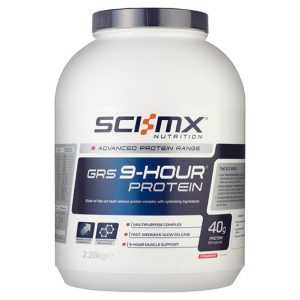